The theme for the "Freedom" exhibition was picked by Nikki Foley as she is brilliant at choosing themes!
I did all the organising.
The first venue was Spike Island, the site of and old prison with several hundred years of history.
The exhibition is currently in The Hunt Museum in Limerick city and it will be there until the 4th of September.
A selection of the quilts will travel to Grovsenor Quilt shows in England next year and Nikki and myself are working on venues for next year. The theme has been picked and I will send out the invitations to quilters' shortly.

So enough chat, here's the quilts with artists' statements: 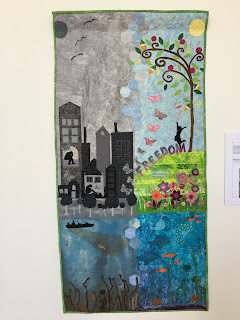 I am a Dublin native now lucky enough to be living on the Dingle Peninsula in beautiful County Kerry. The idea for my quilt came from the modern lifestyle that most of us are living today weighed down with all the stress and worry that comes with it, both financially and emotionally. Why not take some time, even a moment, to get out and enjoy the freedom of nature – land or sea. It will do your soul good. 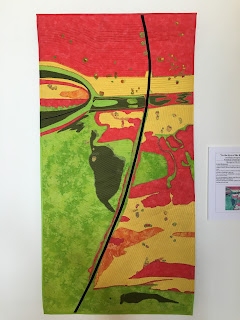 "I took a photograph of an object and used the shapes and relative colour values to interrupt the object in an abstract style. My win was to achieve a balance of shape and colour, which would be pleasing to the eye. The viewer has the FREEDOM to decide whether or not I have achieved this. It is not necessary to know what the original object was. 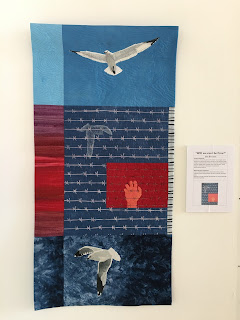 "Will we ever be Free?" by Joke Buursma

"AS soon as I heard the theme "Freedom" I got images about barbed wire and birds. Here in Europe we are having a huge refugee problem. Barbed wire has been used to stop refugees from the Middle East crossing some of the borders. Those refugees are living in inhumane circumstances. What can they expect?" 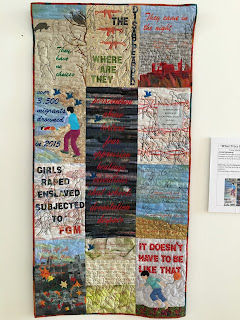 "What Price Freedom?" by Irene MAcWilliam 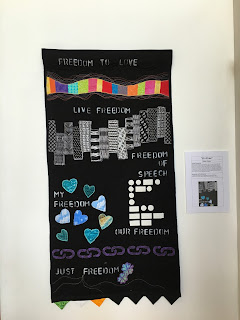 "It's Free" by Nikki Foley

"When you think about the word FREEDOM then it’s a very strong word. I had many ideas for my quilt, and the more I thought about it the more I began to analyze our own freedom. This brought many ideas and changes to my design. Eventually I decided on what came to mind the most. Freedom to love who we want, live how and where we want and freedom to be want we want and to live in a country free of problems. This may be ideal, but not available to everyone. My quilt represents this, the strong contrast of colours against the black background, with a suggestion of each title within the design." 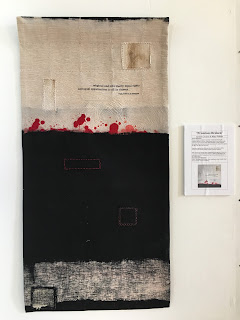 Women had great hopes for equality and freedom during the rebellion and the Civil War. These hopes failed to be realized under subsequent governments of the Irish Republic. In many respects increasing conservatism worsened the position of women throughout the 30’s, 40’s, 50’s, 60’s and 70’s.
This piece explores the difference between the ambitions of the women of 1916 and the reality of post-revolution Ireland.
This work is not without hope, recognising the progress of women in Ireland since Mary Robinson’s election in 1990 and alluding to the referendum on the 8th amendment that will inevitably take place in the coming years. 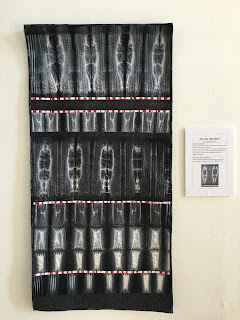 "In the Shadow" by Claire Lynch

My "In the Shadows" quilt was influenced by the recent attacks in Brussels and Paris. These occurrences make you think about the Western World and how we take our freedom for granted. In our midst are sometimes strangers who have a different agenda>" 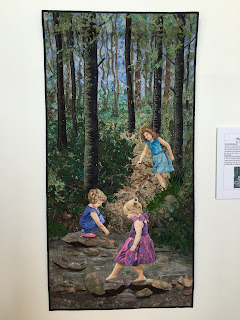 "Freedom means that children can enjoy a carefree life, playing and learning without danger and threats. My inspiration came from a visit to the Slieve Bloom mountains with friends and watching the children playing at the stream. I used my own photographs for the design," 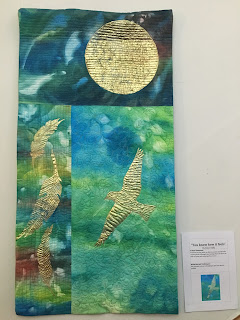 "You know how it Feels" by Ester Kiely
"Freedom to play with my fabrics, paints and threads, starting from a thought and seeing where it takes me with no plan and enjoying the process..." 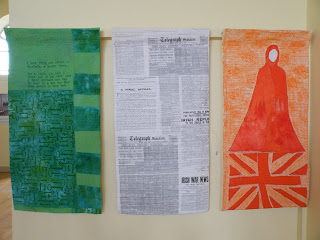 "Freedom is a State of Mind"
triptych by
Paula Rafferty 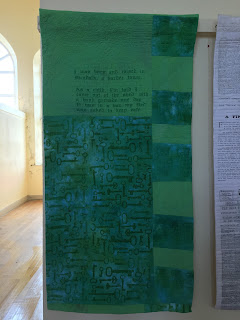 "Freedom is a State of Mind 1" by Paula Rafferty

"In this centenary year, I was reminiscing about a childhood growing up in the midst of "the troubles" and how groeong up in a war zone is normal until you learn otherwise! How far have we come in the last hundred years?" 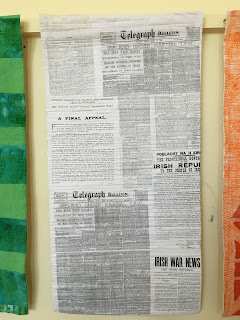 "Freedom is a State of Mind 2" by Paula Rafferty

"This is an ancient land, full of myths and legends. Our history should never be forgotten. But do we learn and progress or do we perpetuate the mistakes of the past again and  again?" 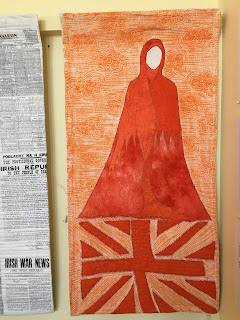 "Freedom is a State of Mind 3" by Paula Rafferty

"Women are still treated as second-class citizens in this country by large portions of the population but at least legally things have moved on. Here are ten things women could not do in the 70’s in Ireland!
Keep their jobs in the public service or in a bank once they married. Sit on a jury. Buy contraceptives. Drink in a pub. Collect their Children’s Allowance. Women were unable to get a barring order against a violent partner. Before 1976 they were unable to own their home outright. Women could not refuse to have sex with their husband. Choose her official place of residence. Women could not get the same pay for jobs as men." 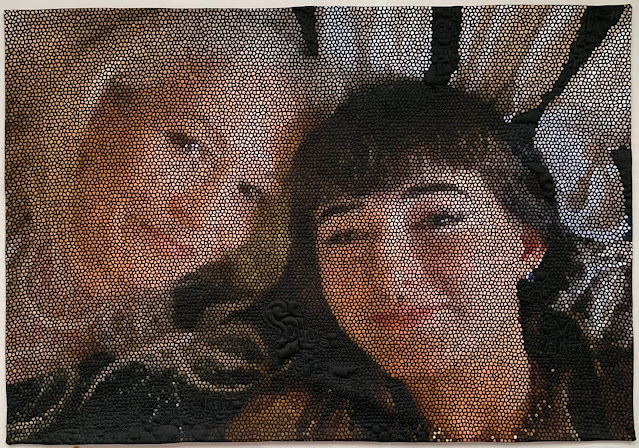 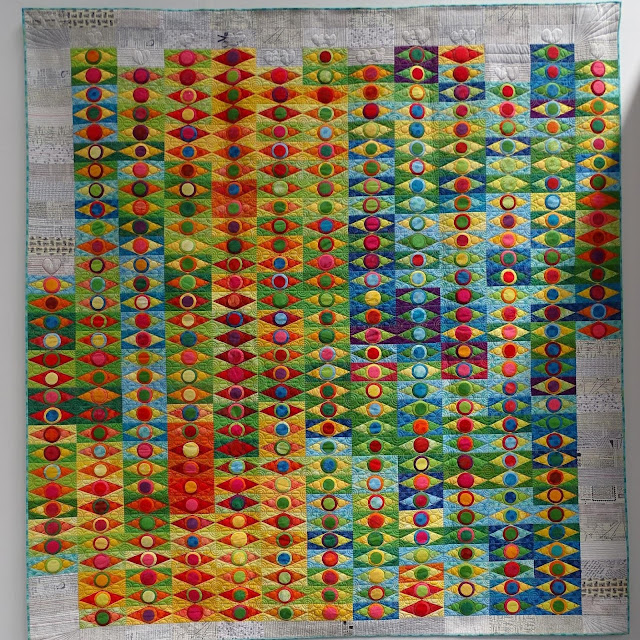 Paula Rafferty
Originally from Dundalk, Co. Louth, I arrived in Limerick in 1987 to attend Art College and never got away.I spent five years at Limerick School of Art and Design, studying Fashion and Finishing with the Art/ Design Teacher Training course which eventually led me to where I am now. Have been teaching Art/ Craft/ Design in the Education Center in Limerick Prison for the last fourteen years. But my passion is Fabric, quilts at the moment, which occupy all my spare time. Mother of two beautiful children, Colum and Isobel, the lights that keep me going in the dark.